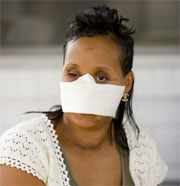 Domestic Violence has been a crime in Ohio since 1979

A victim of domestic violence has both criminal and civil remedies at their disposal, including protection orders that can order the perpetrator to do, or refrain from doing, certain acts

The definition of conduct that constitutes Domestic Violence is addressed more in-depth below; but, generally, the criminal and civil statutes define domestic violence as causing physical harm, attempting to cause physical harm, or making  threats of physical harm to a “Family or Household Member”

A spouse of Respondent

If someone has previously cohabitated with the respondent within the last 5 years, they are a person living as a spouse, even if they had already moved out at the time of the incident

A Former Spouse of Respondent

The Respondent’s parent or children

Any person related to the Respondent by blood or marriage

A parent or child of the spouse of Respondent

A parent or child of a former spouse of the Respondent

Any other person related by blood or marriage to a spouse, a former spouse or a person living as a spouse of the Respondent

The natural parent of any child of which the Respondent is the other natural parent, even if they never lived together or were ever really a couple at all; they may have had a one-night-stand and produced a child

Note that Ohio courts have included same-sex couples that cohabitate together within the definition of Family or Household Member, under the Person Living as a Spouse designation

Ohio law mandates that Ohio courts have prepared packets available for victims to fill out and file “pro se” (without an attorney); many courts have victims’ advocates that will walk you through the filing and hearing process

Ohio law prohibits the charging of a filing fee, therefore, filing the motion for a CPO is free

The motion for a CPO may be filed within a Complaint for Divorce, but there would be a filing fee for the Divorce action

The motion for a CPO needs to be filed in the proper Common Pleas Court; normally, the proper Court will be one of the following

The County in which the perpetrator resides

The County in which the victim resides

The County in which the victim temporarily resides, when escaping the home

A Victim of Domestic Violence can do either or both of the following:

Have perpetrator arrested and charged with the Crime of Domestic Violence

There is the potential for a felony charge with subsequent convictions, however

Upon the filing of a criminal complaint alleging the crime of Domestic Violence, the Criminal Court can issue a Temporary Protection Order (TPO)

The motion for a TPO can be filed by the complainant (victim), by the arresting officer, or the Court can issue one on its own (“sua sponte”), if the Court finds that it is necessary for the “safety and protection” of the victim

The TPO lasts only during the pendency of the criminal case and as soon as there is a disposition (convicted/acquitted), the TPO automatically terminates

But, the Court can issue an Order at the disposition of the criminal case that requires the Defendant to stay away from the victim

The TPO can be issued as a condition of pre-trial release of the defendant, irrespective and independent of any bail determined by the Court

OR THE VICTIME CAN

The Petitioner must file the petition in the appropriate county Common Pleas Court, usually in the Domestic Relations Division

Normally, petitioners first obtain an Ex Parte TPO immediately, then later obtain a CPO that will last for a certain period of time (no more than 5 years) and contain specific restrictions on the respondent

If Petitioner requests one when filing for the CPO, the Court can issue an emergency Ex Parte Temporary Protection Order

At the Ex Parte hearing, the Petitioner will testify and present other evidence, but the respondent will not be present and will not put forth any evidence or controvert the Petitioner’s evidence

As long as the petitioner puts forth sufficient evidence, the Court will issue a TPO and schedule a full hearing after which it will decide whether to issue a more permanent CPO

Due Process mandates that respondent to have a say in court as to the allegations, and to have an ex parte order last for an extended duration would certainly tread upon constitutional rights

The full hearing must be held within 10 days of the ex parte order, unless the respondent has been ordered to vacate his home

If Respondent has been ordered out of his home, the Court must hold the full hearing within 7 days

Although Domestic Violence is defined elsewhere in the statute, the O.R.C. 3113.31 actually defines “Immediate & Present Danger of Domestic Violence” for purposes of an Ex Parte TPO specifically

Immediate & Present Danger of DV includes, but is not limited to:

Threats of bodily injury to a family or household member, or

This hearing will be held 7-10 days after the Ex Parte hearing, and the Respondent must be properly served with notice of the hearing – service must be accomplished pursuant to Ohio Civil Rules 4.1-4.6 (normally certified mail or sheriff)

Note: that Montgomery County Common Pleas Court requires Personal Service on Respondent as a local policy – other Counties may have very specific rules and the local rules need to be consulted

There are several types of conduct that warrant issuing a Domestic Violence CPO, as “Domestic Violence” is defined broadly in the statute; the petitioner need not have suffered actual physical harm – See O.R.C. 3113.31(A)

In order to succeed in obtaining a CPO, the petitioner must demonstrate by a Preponderance of the Evidence (more likely than not) that the respondent has engaged in “Domestic Violence”

“Domestic Violence” most commonly includes the following types of conduct:

Attempting to cause bodily injury to a family or household member

Success is not necessary – if the perpetrator tries to hurt a family or household member, it is sufficient conduct to warrant a CPO

Recklessly causing bodily injury to a family or household member

This would (logically) include intentionally causing bodily injury as well

But, it does not include negligently causing bodily injury (accidents not sufficient)

“Recklessly” basically means the perpetrator consciously disregarded a known risk that his conduct is likely to cause harm to Petitioner – i.e., he knew there was a probability the victim would be injured, but he engaged in the conduct anyway

Petitioner must testify as to both the threat made by the Respondent and the Petitioner’s actual fear; if no testimony is presented as to Petitioner’s fear, the Court should not issue a CPO due to the threats

Any threat must be unconditional; conditional threats will not work (e.g., “if you take Bobby, I will kill you”)

The bodily injury threatened must be “Imminent”; threats of future harm not sufficient

Imminence has been described as “threatening to happen immediately,” “dangerously close to happening” or “just about to happen,” etc

The respondent must not only threaten immediate harm, but must be capable of following through with the threat as well

Effectively, Petitioner must testify to the following for “Threat DV”:

The residence of the perpetrator and/or victim – to establish venue

The Respondent made a threat to Petitioner

That Petitioner is a “Family or Household Member” of Respondent

The Threat was of serious bodily injury to Petitioner

That the serious bodily injury is imminent – about to happen

In addition, as defined, “Domestic Violence” includes other conduct

Committing any act with respect to a child that would result in the child being found to be an “abused child” as that term is defined in O.R.C. 2151.031 (part of the juvenile court statute)

Remember: that the Petitioner must testify to the relationship with Respondent, the residence of the parties to establish proper venue, the particular conduct of the Respondent, and (sometimes) that the Victim is fearful

Although fear is only required for the “Threats” version of DV, if appropriate, it is best to have the petitioner testify as to any fear he or she may have of the Respondent

It is important to note that there can be agreements made between the victim and perpetrator; the parties can agree as to the conditions contained in, and the duration of, the CPO

Often, agreed entries are part of a negotiated return to the home by the Respondent, where the Respondent is now, under penalty of contempt, required not to commit acts of DV against family and household members

Conditions in a CPO

If the Court issues a CPO, it has many conditions (restrictions) it can impose upon the Respondent

Prohibit respondent from abusing a family or household member

Make Respondent leave the residence (there are limitations depending on circumstances)

Require Respondent to provide financial support for the victims, even if he has been evicted from the residence

Prohibit Respondent from entering the residence, school, business or place of employment of the victims

Issue Orders regarding the custody and visitation of minor children

Note that a later Divorce Decree that allocates parental rights and responsibilities, and right to visitation will modify the CPO, if the decree differs from the CPO; this often happens when the CPO directs husband to stay away from his wife and children, but a later divorce decree grants the husband reasonable visitation of his minor children – the CPO is then considered modified

Apportion household and family personal property between Petitioner and Respondent

Require any party (perpetrator or victim) to attend counseling

Penalties for Violating a CPO

When a Respondent fails to follow the Court Order, there can be serious consequences, including jail time – although, absent further violence, the court will normally be reluctant to jail the violator

The Respondent is also subject to criminal penalties pursuant to O.R.C. 2919.27; This is ordinarily a misdemeanor, but depending on the history of the Respondent, a violation can rise to the level of a 5th degree felony (carries a maximum penalty of 1 year imprisonment)

The Respondent is also considered in “Civil Contempt of Court” when he violates the conditions set forth in the CPO, and he can be punished outside of the criminal courts

Civil contempt (violating a valid court order) carries a potential penalty of up to 30 days in jail and $250.00 fine for a first offense.  See O.R.C. 2705.05(A)(1); Penalties escalate for subsequent violations, however

Note, though, that in order to pursue the civil remedy of contempt, the victim must file a motion for contempt (“show cause motion”) with the court that issued the CPO and it must be served on the Respondent

The Court will then hold a hearing, and if the evidence establishes that Respondent violated the conditions of the CPO, the Court can hold the violator in contempt

If the Petition for a CPO alleges violence to a minor child, the Court is required to report it pursuant to O.R.C. 2151.421 – children’s services will then be involved

A Petitioner can have the CPO registered in any county in the state, so that enforcement is available with the local authorities; therefore, if the victim moves to another county, she should register the CPO with the local clerk of court so that the police are made aware of the CPO

Although the longest that a CPO can last if 5 years, the Petitioner can apply for extensions of the CPO before the CPO expires; the bases upon which the Court can grant an extension is detailed in the statute and an attorney should be consulted as to whether the Petitioner is likely to prevail

If the Petitioner seeks orders awarding he or she temporary custody of minor children, temporary spousal, or temporary child support, the Court will require certain affidavits to be filed along with the motion for CPO