Visitation Rights Of Parents and Grandparents 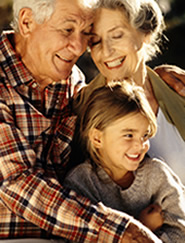 As has been discussed in other sections of Dayton Divorce Help, whenever there is a termination of marriage with minor children, the Court will allocate parental rights and responsibilities between the parents. Unless there is a shared parenting plan incorporated into the divorce decree by the Court, one of the two parents will be designated as the residential and custodial parent (the parent with whom the children will reside and who will be responsible for the day-to-day care of the child), while the other parent will be given parenting time rights (visitation rights).

The visitation rights adopted by the Court will determine which days of the week the non-residential parent will have the children (e.g. every other weekend), when the children will be available for out-of-town vacations, which holidays the children will be with each parent, and so on. Normally there will also be standard notification requirements detailed in the plan as well.

The Court will consider numerous factors in determining appropriate visitation plans, especially if the parents have special circumstances that could impact on the Children’s ability to visit with the non-residential parent and maintain a sense of stability.  The Court could also interview the children, at the request of either parent, to determine the child’s wishes and concerns regarding the amount of time the non-residential parent will have visitation rights.

As with the issue of child custody, either parent may file a post-decree motion to reallocate parental rights and responsibilities with respect to the parenting time plan (visitation plan).  The general standard that the Court is guided by is what is in the Best Interest of the Child.  If the non-residential parent wants to increase visitation time, that parent should file a post-decree motion requesting the increase. The Court that issued the original divorce decree that outlined the initial visitation schedule retains jurisdiction over that issue until the children of the marriage attain the age of majority (18 years old).

The parent wishing to alter the visitation plan delineated in the original divorce decree bears the burden of demonstrating that there has been some substantive change in circumstances since the original visitation schedule was established that would warrant the Court revisiting the issue of parenting time.  The petitioning parent also carries the burden of showing that the change would be in the children’s best interest.  There is a laundry list of factors the Court is to consider in determining whether increased visitation would be in the child’s best interest. In short, Courts do not like to disrupt an established plan without being convinced that something has happened since the divorce was finalized, and that evidence supports that the change would be to the benefit of the child.

While the Ohio Supreme Court has upheld the constitutionality of the third party visitation right statute (mostly used for grandparents and aunts and uncles), it should be noted that the Court must take into account the special wishes of the parent when making the determination whether to grant the visitation.  If the parent strongly disagrees with the visitation, it is possible that the Court will deny the grandparent’s petition.

In determining whether to grant the visitation, the Court is to consider all relevant factors, including the following factors outlined in the statute:

(1)   The wishes and concerns of the child’s parents

(4)   The child’s and parent’s available times for visitation

(6)   The child’s adjustment to home, school and community

(7)   The child’s wishes and concerns regarding grandparent visitation, when the court performs an “in-camera” interview with the minor child

(8)   The health and safety of the child

(10)  The Mental and physical health of all parties involved

(11)  Whether the person filing for visitation has ever been convicted of a crime that resulted in the child being adjudicated abused, neglected or dependent

If the grandparent can put forth evidence touching upon each of these factors in such a manner that demonstrates that visitation would be good for the child, the grandparent stands a decent chance of being granted visitation rights.

In order to be granted visitation, the grandparents must file a motion in the Domestic Relations court during the pendency of a divorce action, or even after the divorce decree has been issued.  The grandparents bear the burden of establishing that the visitation is in the child’s best interest. The Court must specifically take into account the wishes of the parents and unless they are seen as unfit, their wishes may control.  However, this is not to say that a court will go against the parent’s wishes, but rather that petitioning grandparents probably have to demonstrate a prior relationship with the children in order to succeed in showing that the visitation is in the best interest of the child.